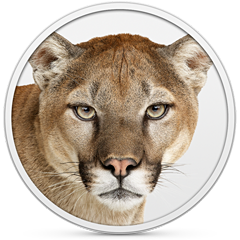 OS X Mountain Lion (version 10.8) is the ninth major release of macOS, Apple Inc.’s desktop and server operating system for Macintosh computers. OS X Mountain Lion was released on July 25, 2012 for purchase and download through Apple’s Mac App Store, as part of a switch to releasing OS X versions online and every year, rather than every two years or so. Named to signify its status as a refinement of the previous OS X version, Lion, Apple’s stated aims in developing Mountain Lion were to allow users to more easily manage and synchronise content between multiple Apple devices and to make the operating system more familiar.

The operating system gained the new malware-blocking system Gatekeeper and integration with Apple’s online Game Center and iCloud services, while the Safari web browser was updated to version 6. As on iOS, Notes and Reminders became full applications, separate from Mail and Calendar, while the iChat application was replaced with a version of iOS’s Messages. Mountain Lion also added a version of iOS’s Notification Center, which groups updates from different applications in one place. Integrated links allowing the user to rapidly transfer content to Twitter were present in the operating system from launch. Facebook integration was also planned but unfinished at launch date. It was released as a downloadable update later.

Mac OS X 10.8 Mountain Lion is available for older systems that are not compatible with the latest version of macOS and requires the following:

You will also need one of the following Mac models:

Any Mac that shipped with Mac OS X Mavericks or later will not be compatible with this installer.